It has been revealed that GameStop is giving away the 2013 Bravado Banshee we've been seeing from West Coast Customs. Unfortunately anyone outside the USA, Guam, or Puerto Rico is not eligible. Quick rules below... NO PURCHASE NECESSARY TO ENTER OR WIN
Sweepstakes is open to legal residents of the 50 United States, the District of Columbia, Guam and Puerto Rico who are at least 17 years of age, excluding employees of Sponsor that reside in Puerto Rico
Commences on September 1, 2013 and ends on September 30, 2013
Subject to Official Rules at http://www.PowerUpRewards.com/epicreward/OfficialRules.
For alternate method of entry and prize description see Official Rules. Odds of winning depend on the number of eligible entries. Total ARV of Prize is $250,000.
Sponsor: GameStop, Inc., 625 Westport Parkway, Grapevine, TX 76051
VOID WHERE PROHIBITED BY LAW

Rockstar has posted more information about the creation of the car:


Ever since its debut as the getaway car in the opening moments of Grand Theft Auto III, the Bravado Banshee has been a symbol of the ultimate American sports car. With its aggressive, oversized styling and powerful engine, it became a mainstay as one of the most sought after high-performance rides from coast to coast - from Liberty City all the way to Los Santos...

Significant work went into creating this real world version of the 2013 model featured in Grand Theft Auto V. Utilizing state-of-the-art fabrication technologies, molds for the exterior were cut and machined piece-by-piece for the high performance base vehicle. With these molds each panel was laid out by hand to create an entirely new exterior resulting in a screen accurate reproduction of the Banshee.

Referencing the model and textures of the in-game car, the interior was handcrafted and stitched to capture the look and feel of its detailed cockpit, with seats upholstered and embroidered with the Banshee name and insignia. The dashboard, door panels and center console were reconfigured and finished with carbon inlays. And finally, a multi-speaker premium sound system was installed before giving it the iconic metallic blue exterior complete with ice white racing stripe.

The result is a one-of-kind supercar worthy of representing the Banshee's heritage and a tribute to some of the deep customization options you'll find in the Los Santos Customs shops of GTA V, where you can equip and style your vehicles with a wide range of visual and performance-based enhancements.

More images were also posted but we'll cut to the unseen interior pics: 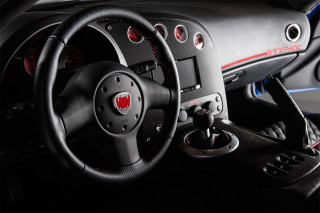 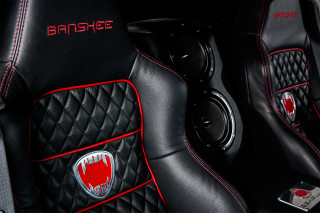 Looking sharp! Again, good luck to all that enter!
All content created by and property of iGTA5.com and must not be reproduced without express written permission. © 2011-2022 iGTA5.com