Rockstar Games is answering more fan questions. Of course by now most questions are focused on future content for GTA V and Rockstar has plenty in the pipe. Short answers: Streamlined Rockstar Editor for new-gen consoles, plenty of new vehicles and weapons among other DLC, no more heists, no Self Radio for consoles, singleplayer mods are okay with Rockstar, GTAO mods/glitches/exploits are not, no official Mac version being announced. 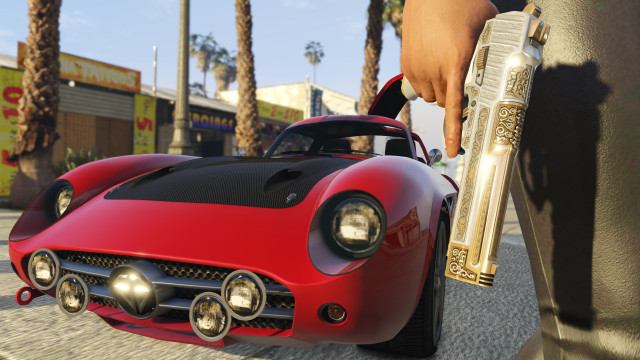 â€œThe real question is: on what are we going to spend the money from the Heists? (For those who have practically everything)â€ â€“ vens243
â€œWhatâ€™s coming next [for GTA Online]â€¦??â€ â€“ Nilix
â€œWill there be more [Heists] added with future updates?â€ â€“ carl0winer

To vens243 and others who are excited to show off their Heists spoils, beyond the many new vehicles and items that arrived to GTA Online as part of Heists, we are also working on another update coming soon that will feature some very cool new toys for you to enjoy and flaunt with your ill-gotten gains. For now, the screenshot above provides just a glimpse... For those asking for more Heists, please understand that Grand Theft Auto Online Heists were a tremendous undertaking so itâ€™s not the sort of thing where we can easily create and publish additional Heists like other Job modes and missions. We are, however, working on other cool updates for GTA Online that you can expect over the coming months.

The Rockstar Editor is an advanced tool requiring additional processing power so it would not be compatible with GTAV on the older systems, but we are currently working on a version tailored for the Xbox One and PlayStation 4 consoles â€“ and we hope to release that sometime this summer, or as soon as it is ready. We are also planning to bring The Lab radio station to all four consoles in a forthcoming title update. Please stay tuned for more information.


â€œWill there be any more updates for [GTA Online] on Xbox 360?â€ â€“ @ColtsPacersJosh

We want to support the older consoles with new content for as long as we possibly can. As we mentioned previously, we always knew there might be a point where we would reach the technical capacity of what the older generation of consoles can handle as each downloadable update requires additional memory both for assets and for additional scripting. We have continued to optimize the entire game over time in order to squeeze as much memory as we possibly could out of the last-generation hardware and at some point, continuing to add content for those systems could cause the risk of instability to the game overall. As of now, we are planning on releasing the next big content update for all five systems and we will continue to squeeze as much as we possibly can onto them.

The GTAV PC Self Radio experience that plays your personally curated playlist of mp3s in the game as a fully featured and properly integrated radio station just wouldnâ€™t technically be possible on the consoles as it requires more than the consoles allow at this time.


â€œIâ€™m having soo much fun with GTAV on the PC but I just have one question about it, how come you are not allowing mods for it?â€ - @ClarkMatthew63
â€œWill I get banned from GTA Online for using a FoV Mod or Oculus Rift mod?â€ - @Mattophobia

We have always appreciated the creative efforts of the PC modding community and we still fondly remember the awesome zombie invasion mod and original GTA map mod for GTAIV PC among many other classics. To be clear, the modding policy in our license has not changed and is the same as for GTAIV. Recent updates to GTAV PC had an unintended effect of making unplayable certain single player modifications. This was not intentional, no one has been banned for using single player modifications, and you should not worry about being banned or being relegated to the cheater pool just for using single player PC mods. Our primary focus is on protecting GTA Online against modifications that could give players an unfair advantage, disrupt gameplay, or cause griefing. It also bears mentioning that because game mods are by definition unauthorized, they may be broken by technical updates, cause instability, or affect your game in other unforeseen ways.


â€œWe want to play GTAV with joystick. Will you add joystick support for PC? There is a huge difference between gamepad and JS.â€ â€“ @eniyikotuadam
â€œJust wondering if thereâ€™s a possibility of including joystick support for GTAV in any upcoming patches or updates?â€ â€“ received via Mouthoff
â€œRockstar friends, GTAV PC version would be significantly enhanced if players could use their steering wheels.â€ â€“ received via Mouthoff

Thank you for the feedback! We understand that many PC players out there would like to see enhanced peripheral support for specialized controllers such as flight sim joysticks and steering wheels. No promises, but it is something we are investigating to see if possible in a future update.


â€œCan I play GTAV on my Mac?â€ â€“ received via Mouthoff
â€œWhy this game isnâ€™t [available for] Mac?â€ â€“ Jaalloav

While GTAV isnâ€™t technically released for Mac, you can actually play the PC version on a Mac by running Windows 7 or 8 through Boot Camp. You can find instructions along with some other requirements over at Rockstar Support.


â€œHi Rockstar! Please report these guys on YouTube who destroy your game. Look at all the cheats they promote in their videosâ€¦ Iâ€™d be grateful for answers on what you plan to do with about this?â€ â€“ Aleek94
â€œOkay, so I've let this slip under the carpet, but now I'm really starting to get pissed off with the whole situation. I can accept people grinding Capture or Rooftop Rumble, what I can't get over is the amount of people doing money and RP glitches, and the YouTubers who are feeding the community with them... I suggest you take action on the YouTubers who are promoting these glitchesâ€¦ they need dealing with, because they're the ones starting to destroy GTA Online...â€ â€“ ilewisgta

We are tremendous fans of the vast majority of YouTube content that fans post using footage from our games â€“ everything from original machinima movies to funny gameplay moments to hypnotizing time-lapses and so much more â€“ but we obviously do not support or condone any videos that attempt to instruct people how to cheat their way towards illegitimate RP, counterfeit GTA$, duping vehicles without having earned them and other things along those lines that compromise the fairness of the gameâ€™s ranking and economy systems. We have a long-standing policy on posting copyrighted Rockstar Games material over at the Rockstar Support website, and to make things clearer on this front, weâ€™ve just added a bulletpoint about this particular type of content there. Just like our other long-standing rules about not posting pre-release leaked footage, spoilers or entire in-game television content episodes â€“ anyone who posts videos that encourage and promote ways to cheat your way towards gaining illegitimate RP or counterfeit in-game money or duplicating in-game items without having earned them may have their videos flagged for takedown with YouTube. Thank you again to everyone in the community (and especially the hardworking and creative GTA YouTube community!) for helping to bring this matter to our attention. Thanks also to everyone in the community for your ongoing efforts since the launch of GTA Online in reporting glitches, bugs and exploits to us via the Support website â€“ itâ€™s invaluable information that helps inform fixes in Title Updates and via dynamic tuning to help keep GTA Online as fair as possible for everyone.


â€œAre you guys doing anything to fix godmode/invisibility and unlimited ammo [in GTA Online]?â€ - @TacticalTaco5

Absolutely. We have always taken this issue very seriously and have people dedicated to addressing these problems when they arise. Unfortunately even a tiny minority of people cheating can have a negative impact on a larger population. In addition, solving this problem requires a different approach on each platform. We have been regularly rolling out fixes for specific exploits and tools to enable us to combat cheating with each patch and we are going to continue to do so. While itâ€™s unrealistic to say we can solve the problem of cheating forever and for everyone, we believe we are making significant progress on this issue and we will continue to work aggressively to stop these griefers in their tracks as best we can.


Any other questions feel free to hit up [email protected] or hit up the comments below as well as the forums!
All content created by and property of iGTA5.com and must not be reproduced without express written permission. © 2011-2023 iGTA5.com