Freemode Events in Grand Theft Auto Online are a new advancement in open world gameplay, giving players access to a range of seamlessly integrated games and challenges in GTA Onlineâ€™s Freemode. Taking full advantage of the latest generation of consoles and PC hardware, there are no menus, lobbies, or load times â€“ just an open Freemode session filled with Friends, Crewmates, rivals, and randoms where spontaneous and chaotic new games and challenges will appear. 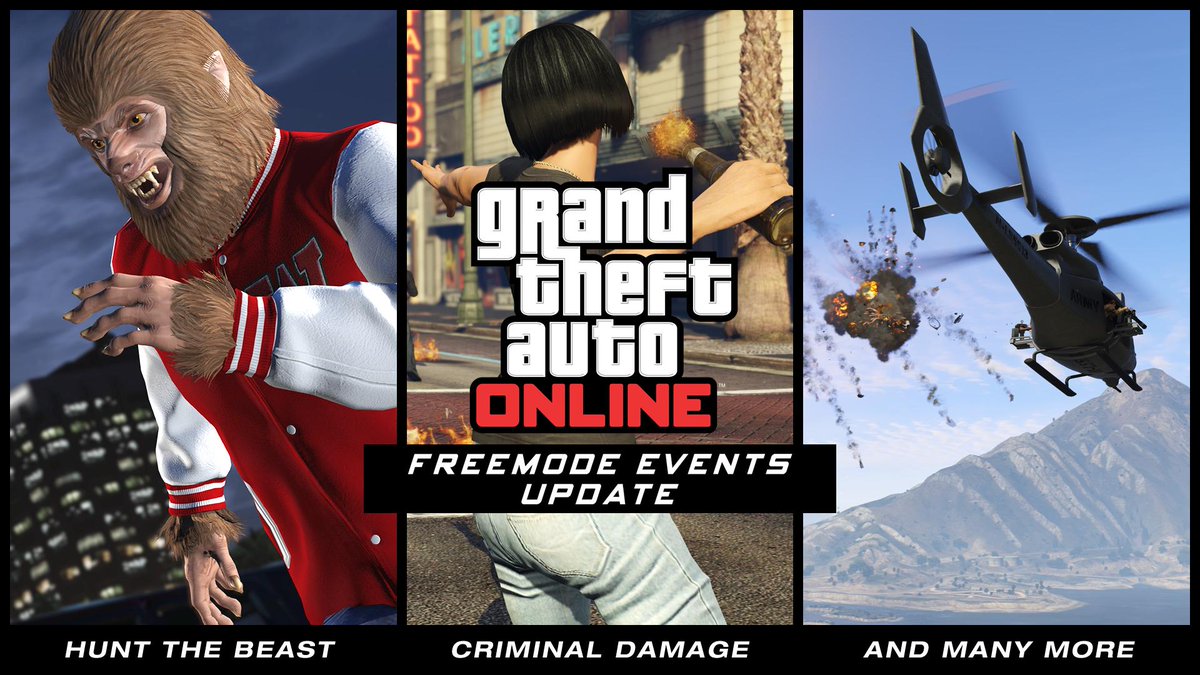 One of these events can kick off at any given moment while in Freemode, and you can customize your session to decide exactly which ones will happen â€“ so you can play as much or as little of this new content as you like. With countless variations on each Freemode Event, there are tons of unique new experiences, each offering new opportunities for reaping GTA$ and RP in GTA Online.

Feeling locked and stocked? Look out for King of the Castle â€“ an every man for himself turf war where youâ€™ll need to ascend and claim the designated â€˜castleâ€™ as your territory â€“ and then fend off everyone else as they go all out to dethrone you. Form fragile alliances and work together in modes like Hunt the Beast, where one volunteer is temporarily transformed into a faster, stronger, beastly character who must escape relentless pursuers. Freemode Events also take the shape of insane stunt challenges, such as popping the longest wheelie, catching the most air in a land vehicle, or performing the most near misses in a vehicle without crashing.

Also included with next week's update are two brand new Adversary Modes. First, Hunting Pack: youâ€™re part of a team tasked to deliver a priority vehicle rigged to explode if it drops below a minimum speed, while your opponents race, ram and batter to take it down. Or try Cross the Line, where heavily-armed squads face off across a neutral zone â€“ with the goal of having all team members strategically penetrate their opponents territory to claim victory. The Freemode Events Update also brings the Rockstar Editor to PlayStation 4 and Xbox One with new features (also being added for current PC users as well) such as an ambient audio and sound effects library, Snapmatic integration, Director Mode updates and more.

Come join the discussion in our forums! See you in GTAOnline!
All content created by and property of iGTA5.com and must not be reproduced without express written permission. © 2011-2023 iGTA5.com