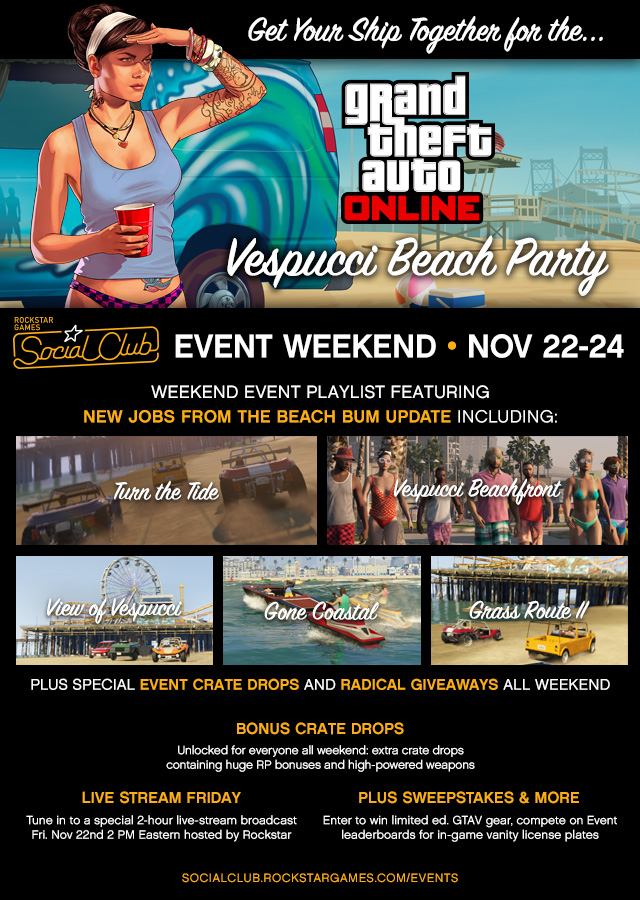 All weekend long, plunge into a special Social Club Event Playlist of brand new Jobs from the freshly landed Beach Bum Pack, a hand-picked selection of ten of our favorite new Jobs. Drop some sea shells, go for a fuel-injected run on the beach, and take in some of the most spectacular stretches of coastline in the Los Santos Bay area in modes including Sea Race, Parachute, Team Deathmatch and more. The best performers in the Social Club Event Playlist on each platform will score themselves a special vanity license plate reward for bragging rights and to commemorate their achievement.

In Free Roam, look out for an influx of special Event Crate Drops dropping frequently all weekend containing more than double the usual amount of RP plus high-powered weapons, bonus cash and clothing. They'll be unlocked for every player to help you pack more than just sunscreen on the blazing sands.

This inaugural GTA Online Social Club Event also features exclusive sweepstakes giveaways of beach-ready GTAV collectibles, a very special live stream broadcast on Friday and more. We'll be on the lookout for your sun-kissed Snapmatic pics all weekend so be sure to tag them #VespucciBeachParty so that we can find them easily and we might feature them next week here at the Newswire.

Hereâ€™s a full rundown of all the action to expect:

Available this weekend only is a special Social Club Event Playlist of new Jobs curated to test your mastery of land, air and sea:

Show some Vespucci beach bums the true meaning of 'spaced out' with this steep parachute descent from 2980ft. See how many checkpoints you can hit before opening your 'chute.

Up the Creek (Bike Race)

Dirt bike point to point going along Cassidy Creek and ending at the Alamo Sea. Shred from gravel and pavement to the beachfront and try to trump the rest for fame and fortune.

A challenging and scenic boat race weaving around the islands North of Paleto Bay. Tip: Look out for a ramp to help you get one over on your competitors.

Stop the gentrification of Vespucci Beach dead in its tracks with this Team Deathmatch around and on top of the businesses along the beachfront.

In this sequel to the original popular Grass Route Race, go off-road in an epic heat starting on the North bank of the Zancudo River through the treacherous wetlands with a triumphant finish on the beach in North Chumash.

Sure to be a new fan-favorite motorbike race, menace Vespucci Beach on your two-wheel rocket, taking breakneck corners as you try and best the competition.

Home to an infamous truck stop, Procopio Beach has long been known as a place where people come to blow off steam, and this Team Deathmatch along the shoreline at the foot of Mt. Gordo is no exception.

Hug the coastline, pull off some breakneck turns and leap over treacherous rocks and islets in this rough race that starts in the LS River and takes you through the Palomino Highlands on the East Coast.

In this off road Race along the coast, up to sixteen speed demons leg it out across Procopio Beach and the North coast down through Paleto State Beach to Paleto Cove.

Enjoy the stunning vistas as you rapidly descend towards Paleto Cove by Mount Chiliad... but not so much that you forget to open your chute. Prepare for a long free fall from 7500ft, weaving and diving between checkpoints and the drop zone.

Weâ€™ve reserved 20 special and unique vanity license plates to award top performers in the Event Playlist Leaderboard for each Job across both PlayStation 3 and Xbox 360. By the end of day Monday November 25th, weâ€™ll award the following plates to the 20 people who achieve the below (plates will be added to your collection in your iFruit app).

Note that in the case of two players getting precisely the same stat, we will decide on a tie-breaker stat at our discretion. 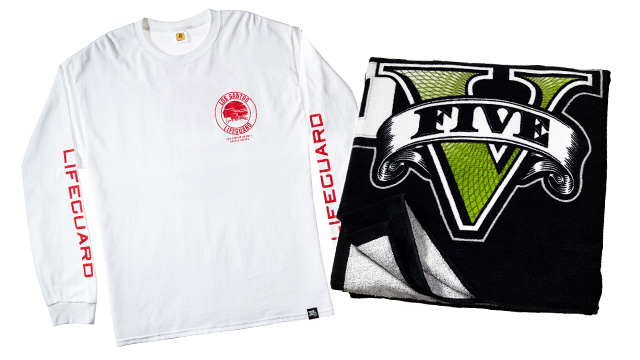 Tune in on Friday November 22nd from 2 - 4 PM ET at socialclub.rockstargames.com/events or at twitch.tv/rockstargames for a special first live GTA Online Event broadcast show hosted by Rockstar. Weâ€™ll also be hosting a live chat at both of those pages where you can ask questions, or tell us what you and your Crew are up to in Online and we just might drop in on you to spectate with our live Event cameras. Make sure to follow us at Twitch or at Twitter or Facebook to get the word straight away when the broadcast begins. Members of Rockstar Games will also be online during the broadcast playing on both Xbox LIVE and PlayStation Network as PlayRockstar, PlayRockstar1 and PlayRockstar2, so feel free to look for us and send a request our way on Friday.

We look forward to seeing you all in the Playlists causing bucketloads of carnage up and down the coastline. Stay tuned as this is just the first of many Grand Theft Auto Online Social Club Events that will be happening regularly in the months to come.
All content created by and property of iGTA5.com and must not be reproduced without express written permission. © 2011-2022 iGTA5.com