With another content update for GTAV/GTAO comes yet another weekend event for Grand Theft Auto Online. Check out live streams with chat this Friday, take part in a snapmatic contest and get bonuses Friday through Sunday including exclusive shirts for Social Club members. Many more details in the full article... 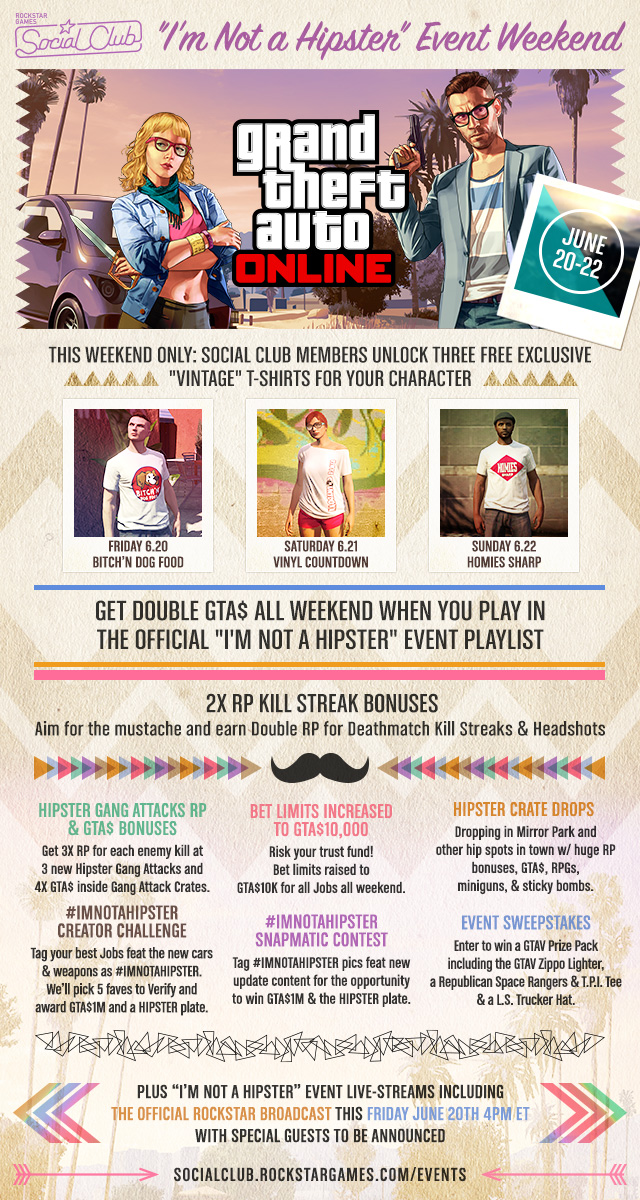 EXCLUSIVELY UNLOCKABLE THIS WEEKEND: REDEEM DAILY 'VINTAGE' TEES FOR YOUR CHARACTER
Social Club members, collect three exclusive vintage t-shirt as seen in the flyer above that will only be available to redeem for one day each on Friday, Saturday and Sunday. As long as you play at some point during each of those three days, you'll then get to keep the tees in your inventory for good.

Each t-shirt will be available in your inventory as a wardrobe option after you enter GTA Online on the specified day, as well as in clothes stores on those days. Make sure to play each day this weekend for your only chance to redeem and keep them all.

GET TRIPLE RP FOR ENEMY KILLS AND QUADRUPLE GTA$ INSIDE GANG ATTACK CRATES WHEN PLAYING THE THREE NEW GANG ATTACKS THIS WEEKEND
Gentrification has its critics and recently the Mirror Park, Chumash and East Vinewood areas have been teeming with unsavory characters who have taken umbrage against anyone wearing too-tight jeans. Three new Gang Attacks are now available to play in these areas and exclusively during the event weekend, they will yield 3X RP for each enemy kill as well as a 4X GTA$ bonus inside Gang Attack Crates upon completion. Consider it just rewards for protecting your right to individualism.

DOUBLE RP FOR KILL STREAKS AND HEADSHOTS IN DEATHMATCHES
You know that it's all about form and function, so attack with panache - aim for your enemy's funny haircut in Deathmatches to get Double RP bonuses for Kill Streaks and Headshots.

BET LIMIT INCREASED FOR ALL JOBS TO GTA$10K
Risk showing everyone that you're actually trying and put your money where your mustache is by laying a bet on yourself or another player. The Max Bet limit for all Jobs will be raised to GTA$10,000.

EVENT CRATE DROPS
Look out for Event Crate Drops, each one a smorgasbord of huge RP bonuses as well as GTA$ stacks, heavy-duty RPGs, miniguns, sticky bombs and more, falling from the skies in the city's most painfully hip locations such as Mirror Park.

THE #IMNOTAHIPSTER SNAPMATIC CONTEST
Submit your most creative, most amusing and/or most artfully composed shots of the new content in The "I'm Not a Hipster" Update for the opportunity to win GTA$1M and a HIPSTER vanity license plate for your in-game vehicle. Rockstar is looking for your best costs-a-fortune-to-look-broke outfits; effortlessly artful poses with your disaffected Crewmates next to your fleet of Glendales, Blades and other brand new vehicles; and anything else that proves you are definitely, absolutely (not) a hipster.

To make your shots eligilble for entry, simply log in to Social Club and tag them #IMNOTAHIPSTER between now and the end of Sunday.

THE #IMNOTAHIPSTER CREATOR COMPETITION
If GTA Online's Creator tool is your preferred creative outlet, Rockstar will be on the lookout for standout Jobs (Races, Deathmatches, or Captures) that feature the new vehicles and weapons in The "I'm Not a Hipster" Update to also reward with GTA$1M and the HIPSTER vanity plate. Just tag them #IMNOTAHIPSTER in Social Club between now and Sunday night to be eligible in the competition.

EVENT WEEKEND LIVE STREAM
Check out the official "I'm Not A Hipster" Event Weekend live broadcast happening this Friday June 20th from 4-6pm. The stream will feature two hours filled to the brim with playthroughs of new Jobs, special challenges and more as Rockstar plays live with select members of the GTA Online community and with special guests to be announced.

They'll be streaming across the Social Club Multiplayer Events page, the official Rockstar Games Twitch.tv channel and the Rockstar YouTube channel. Be sure to join us in the Rockstar-hosted chats at Twitch and at Social Club as well - we often check in directly with viewers there over the course of the stream. 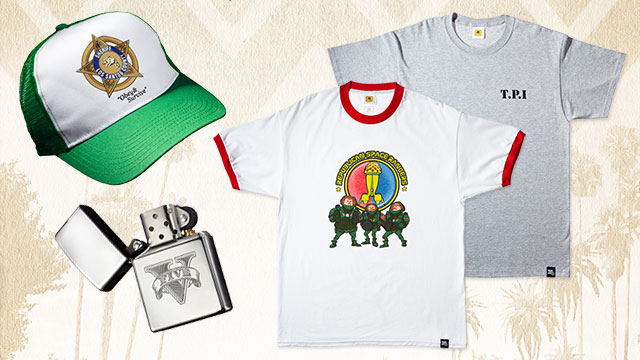 Phew! Have fun and join the fun in the forums!
All content created by and property of iGTA5.com and must not be reproduced without express written permission. © 2011-2022 iGTA5.com