Polygon got the chance to interview Rockstar Games VP of Creative, Dan Houser. In it he explains the intricacies of character switching and the life each character lives outside the main story. It's another good read for all of us looking forward to playing as the three protagonists.

Here's some snippets from the article that you can find here.


"This isn't anything to do with the story or the narrative, but does tell the wider story of these people because they're all living their own lives," Houser said. "Any moment you could go and see what they're up to and it relates to what point you're up to in the real story. You just get a real feeling for them as existing outside of you controlling them, so that just kind of added this great ambient storytelling quality and fun to it. You jump across and Trevor's doing something crazy. Michael's stuck in some kind of existential hell hole of his own making, and Franklin is getting into his trouble."

"You'll miss lots if you don't pop over to [a character] from time to time," Houser said. "You'll miss lots of the stuff they are potentially getting up to, but you won't miss key plot points. It will be little details about what their lives are like, based on what you've done in the plot. You'll miss those obviously if you move the plot past where those are no longer relevant, and just the sheer number of things you can see them get up to, you'll miss them if you don't keep going to have a look for them."

"It should feel as you play through the game that you get pulled towards one of the characters and away from another one, and back again. So we wanted you to feel like you've been pulled and pushed by the characters into believing this or that one's better or worse, or more justified, less justified in his actions or behavior or whatever."

It's another good interview straight from the source at Rockstar Games.

As an added freebie to go along with the article, Rockstar was kind enough to give them some sweet new Official Artwork. 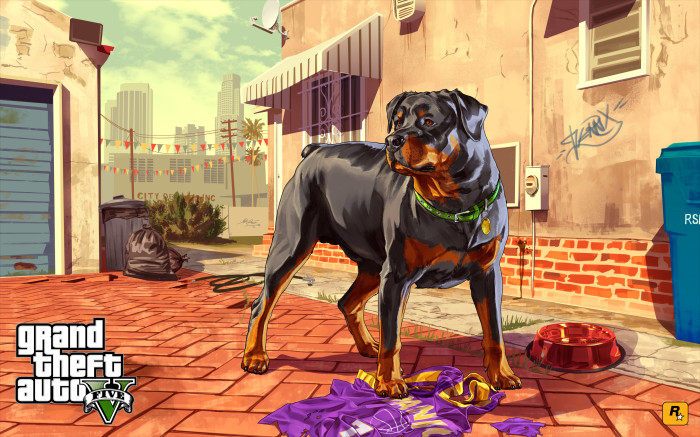 It's Chop!! If you want to talk GTA, join us in The Forums!!
All content created by and property of iGTA5.com and must not be reproduced without express written permission. © 2011-2023 iGTA5.com