Rumors are circulating that Take 2 have put out a private casting call, presumably looking for voice artists for the new Grand Theft Auto game (which we presume to be GTA 5).

In it are a number of character profiles, one of which in particular stands out... A character listed by the name of James Pedeaston. Although not a major character, and probably not one you'll remember, James has been present in previous GTA games, notably Grand Theft Auto IV. He was on the "WCTR" radio station talking about his desire to make love to young tribal boys.


James Pedeaston is a child molester wanted in Malaysia and is being investigated by the FBI. He hosted The Wild Traveler show on WCTR in 1992, although it is apparently syndicated to nine other stations (not heard in-game). He enjoys traveling the world and logging some of his most â€˜exoticâ€™ encounters in his travelogue, some of which he accidentally reads on-air to the disgust of the listeners. His favourite memory seems to be a relationship with a boy named Avrindar in Sri Lanka. His show appears to be so reviled by his listeners that at one point, he receives few calls which are not supportive. For example, a caller tells him to stop droning on about other countries and focus on talking about where he lives. At one point he received a phone call from a suicidal man in Verdant Bluffs who wanted to go to hell. Pedeaston replies with â€œMe too! Buy me a refrigerator magnet when you get thereâ€. In GTA IV, he was arrested by the Indonesian police after being suspected of child molesting in Bali, Indonesia in 2003.

Here is a screenshot of the casting call in question, which was posted today and can be viewed at ActorsPages.org (although bear in mind the website no longer (?) displays Take 2 as the production company). 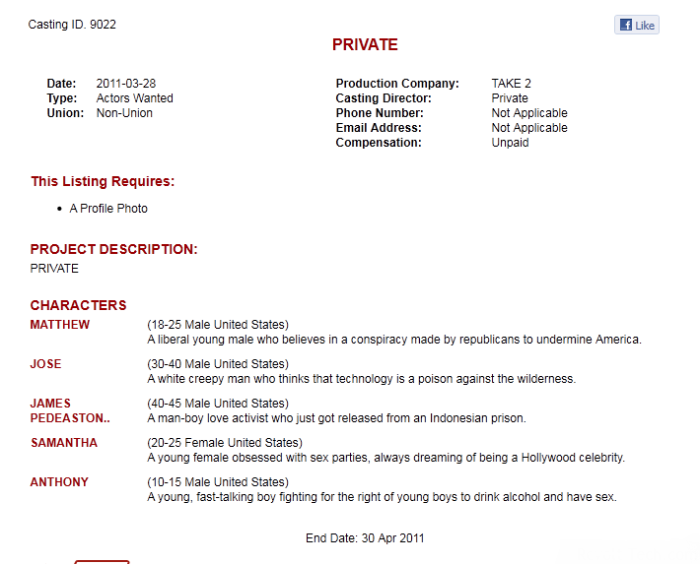 The end date for applications is the end of April this year, which could still point to a game release before the end of the year. Whether these characters will be radio personalities or actual characters in the game remains to be seen, but if this information is correct it provides us with some useful clues towards the game's location (Hollywood - LA once again) and time setting (modern day - or close to it).
All content created by and property of iGTA5.com and must not be reproduced without express written permission. © 2011-2023 iGTA5.com