In the first Rockstar Editor contest open to all three platforms, PC players will now be up against the talented hordes of creators on PS4 and Xbox One. With increased competition and an incredible pack of prizes for the winner, everyone will need to be on top of their game to have their video chosen as the official music video for Little Dragon's "Wanderer" off the Welcome to Los Santos soundtrack.

As well as being open to three platforms, this is also the first Editor contest in which players can take advantage of the new Rockstar Editor features released in the Freemode Events Update - including Sound Effects, Ambient Tracks, refined Clip Management and more! 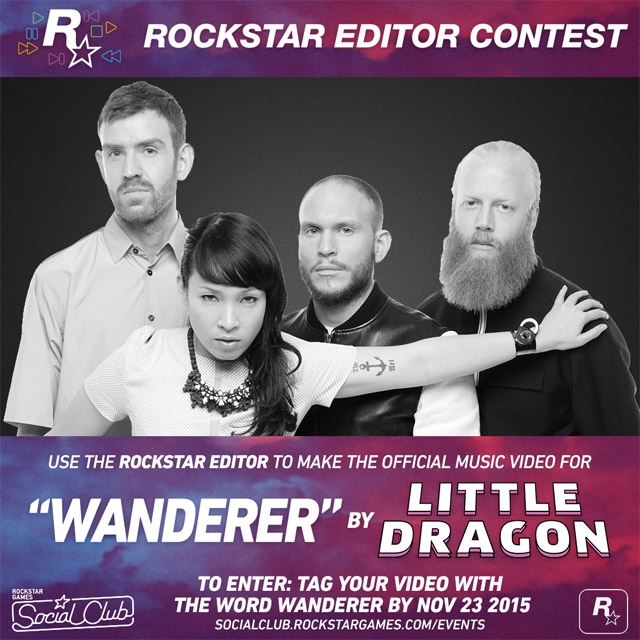 THE CREATIVE BRIEF
Little Dragon have commissioned the Social Club community to create their official music video for "Wanderer". Little Dragon themselves along with Rockstar Games will be reviewing the finalists and deciding who wins. Here's a bit of direction on what they are looking for:

Entrants are challenged to create a music video using the Rockstar Editor telling the story of a rogue - a very clever double-agent or double-crosser who plays two sides of a criminal enterprise to her or his own advantage.

You may have heard the track on the Alchemist & Oh No Present: Welcome To Los Santos album and the new in-game radio station The Lab, you'll want to know it inside out to ensure your visual accompaniment is pitch perfect. To get you thinking about your own interpretation, here's the track for you to listen to. 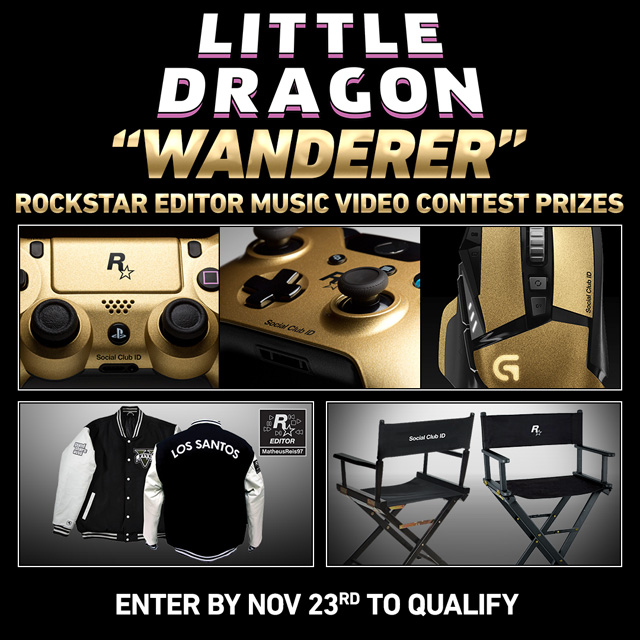 As well as the prestige of having your opus selected as the track's official music video, the grand prize winner will receive an incredible pack of prizes including a gold game controller (with real 24K gold paint) customized with your personal Social Club ID. The winner can choose between an Xbox One or PS4 controller, or a G510 Proteus Core Gaming Mouse featuring 11 programmable buttons, customizable weight and five selectable DPI settings, from headshot-precise 200 DPI targeting to lightning-fast 12,000 DPI maneuvers. Not only that but the winning director will also be able to craft their next masterpiece from the comfort of a Rockstar Editor branded director's chair, also featuring your personal Social Club ID - a throne fully befitting a champion. Finally, the rare and coveted GTAV Varsity Jacket will also be sent your way - featuring a special custom patch touting your status as a Rockstar Editor letterman for the world to see.

Two runners-up will each receive a $100 Rockstar Warehouse gift card and a deluxe prize pack of official GTAV gear and will also be featured at the Rockstar Newswire.

HOW TO ENTER
Entering the competition is easy. Simply create a video in the Rockstar Editor on PC, PS4 or Xbox One and publish it to Rockstar Games Social Club via the in-game menu. Make sure to tag your video with the word "wanderer" to enter it into the contest. You can do this in-game, or via the My Videos page on Social Club. A few important points:

Little Dragon and Rockstar Games will pick the winning clip taking into consideration adherence or interpretation of The Creative Brief mentioned above, entertainment and artistic value, editing quality and overall creativity. Watch the Social Club contest page to see how other Social Club members think your clip stacks up against the competition and stay tuned for the winners announcement later this fall. Void in certain countries and where prohibited. See official rules and eligibility details.


Have fun and join the chat in the forums!
All content created by and property of iGTA5.com and must not be reproduced without express written permission. © 2011-2023 iGTA5.com